Here’s how he does it:

I take a small boat out to sea in a known shark area, a piece of tuna tied to the back of the boat as bait.

The shark is confused. It smells the bait, but sees something it doesn’t recognize, the boat’s reflection on the water’s surface. It circles round the boat trying to work out how to bite it.

I draw the bait in towards the boat and up on to the deck. The shark comes closer, even more confused now that the bait is on the boat and not in the water. What it sees and smells does not add up.

The shark pokes its head out of the water and mouths the air, like it’s trying to work out how to bite the boat.

I lean over the edge, and wait for the shark to open its mouth.

Then I take one or two fingers and press them against the shark’s snout. You only need a second, sometimes even less. It’s a quick, hard push. 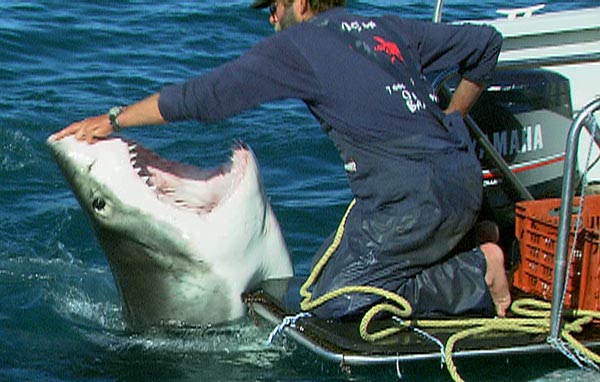 It’s almost like the shark is hypnotised. The animal goes into this pleasant, but confused state, dreamily seeking the source of the stimulus. The shark flips on to its back, and drifts harmlessly out to sea.

Sharks have electronic receptors in their snouts. This area is so sensitive that the slightest touch creates a rush of information that puts the shark into sensory overload. This is called tonic immobility.